Top Satellite Launches to Watch in 2022 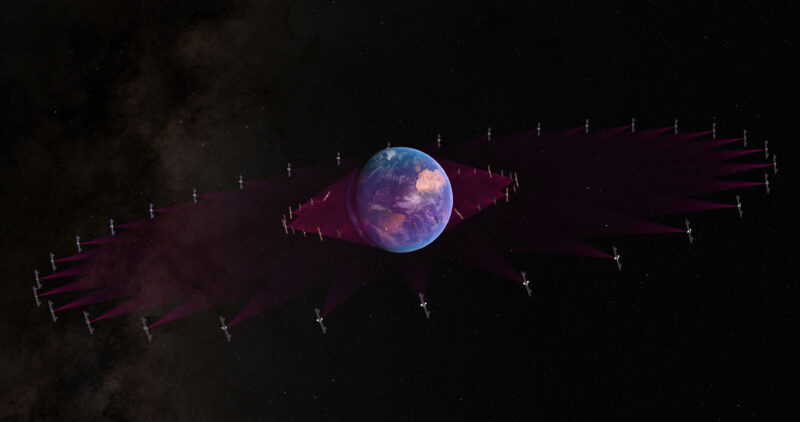 This year is set to be a big one for satellite launches, as a number of major satellite operators launch satellites that mark the culmination of years-long business plans and investments.

In this round-up, Via Satellite previews the top satellite launches we’ll be watching and covering in 2022.

SES is planning to launch two batches of its anticipated O3b mPOWER constellation in 2022. The first batch of three satellites is set to launch in the first quarter of 2022, and the second batch of three satellites in the second quarter 2022, SES confirmed to Via Satellite. The O3b mPOWER constellation will start service by the end of the year with those six satellites.

SES tapped longtime launch partner SpaceX for the missions, and SpaceX will launch the two missions from Cape Canaveral in Florida on Falcon 9 rockets. Boeing is building the full constellation of 11 O3b mPOWER satellites, based on the 702X bus.

O3b mPOWER is the next generation of the SES O3b fleet in Medium-Earth Orbit (MEO), which was completed with 20 satellites in 2019. It will offer terabit-level system capacity and be able to deliver managed services from tens of Mbps up to multiple Gbps per service. The constellation will primarily serve customers including cruise, commercial shipping, aviation, telcos, mobile network operators and cloud providers, militaries, government agencies, and enterprise users like oil and gas and mining.

Viasat is preparing for the launch of ViaSat-3 in the first half of 2022. It is the first in a trio of Ka-band satellites and it will be the highest-capacity single satellite launched to Geostationary Orbit (GEO).

Viasat announced the ViaSat-3 constellation in 2015 as a massive ramp-up of on orbit capacity. Each satellite is anticipated to offer 1 Terabit per second of capacity, delivering speeds to users at 100+ Mbps. The first satellite will cover the Americas and the surrounding oceans regions, the second will cover Europe, the Middle East, and Africa, and the third will cover the Asia-Pacific region. Viasat built the payload, and Boeing Satellite Systems is integrating the bus module, based on Boeing’s 702 platform.

During Viasat’s second quarter 2022 financial results, the company said the payload is at Boeing Satellite Systems for final integration and environmental testing ahead of the launch. The company’s most recent public information targets launch in the first half of 2022. Viasat did not provide Via Satellite an update before publication of this article. Viasat previously targeted a 2021 launch, but had to push plans back.

Viasat has three launch contracts for the constellation, with Arianespace on an Ariane 6 rocket, one with United Launch Alliance on an Atlas V, and one with SpaceX on the Falcon Heavy. Next Spaceflight reports that SpaceX will launch the first satellite in the constellation.

The first WorldView Legion batch was set for launch in 2021, but Maxar pushed back the launch due to hardware and work delays. In the company’s most recent quarterly results, CEO Dan Jablonsky said Maxar expects the remainder of the constellation to launch three to six months after the first.

Jablonsky spoke with Via Satellite about Legion in late 2019: “The customers that we’ve been speaking with are very excited about Legion, because the amount of information Legion captures, combined with our software and modeling capabilities, creates truly actionable data that can help them solve their most critical missions,” he said.

Eutelsat — KONNECT and 10B

Eutelsat continues its business evolution into a satellite fixed broadband provider with KONNECT VHTS, due for launch in the first half of 2022. KONNECT VHTS follows KONNECT, which entered service in 2020, covering part of Europe and Africa. KONNECT VHTS will cover Europe for broadband, mobility, and government service.

Built by Thales Alenia Space, the satellite was originally projected to enter service in 2021, but encountered delays. Eutelsat did not respond to Via Satellite’s request to confirm the launch time frame, but targeted the first half of 2022 in its latest quarterly results.

The satellite will be the largest ever built by Thales, stretching as tall as a three-story building. It has Ka-band capacity of 500 Gbps. The payload includes a high-performance digital processor that allows for dynamic capacity allocation and optimized spectrum use.

Separately, Eutelsat is also preparing for the EUTELSAT 10B launch in the second half of the year. Also built by Thales, 10B will serve both connectivity and broadcast customers, aimed at meeting demand for aviation and maritime mobility services.

Hughes Network Systems has been capacity-constrained in the United States for some time, and the company is awaiting a sizable increase in on-orbit capacity with JUPITER 3. The satellite will have more than 500 Gbps of capacity — two to three times the capacity of JUPITER 2.

Maxar is building the satellite, and has seen some delays with the program. When the satellite order was placed in August 2017, Hughes targeted a launch in early 2021. That date slipped multiple times, but continues to stay on track for the second half of 2022, Hughes confirmed. The company has not yet announced a launch provider.

JUPITER 3 will increase capacity and support business expansion in the United States, Canada, Mexico, Brazil, and other countries in South America. The satellite aims to serve a wide range of sectors such as consumer, enterprise, aeronautical, cellular backhaul, and community Wi-Fi, with service plans with download speeds of up to 100 Mbps. The satellite will also use Q- and V-band for gateway feeder links in order to optimize the amount of Ka-band available for customers, which Hughes says makes it the first high throughput satellite to do so.

The launch of AST SpaceMobile’s BlueWalker 3 satellites is highly anticipated. The company is taking a novel approach to satellite connectivity — via a cellular broadband network in space. BlueWalker 3 is designed to communicate directly with unmodified mobile phones on Earth and validate the company’s space-to-cell network for testing with mobile network operators. It will not offer residential broadband, but cellular connectivity.

AST SpaceMobile is targeting summer 2022, contingent on SpaceX for the final launch window. The satellite was set to launch with SpaceX between March 1, 2022 and April 30, 2022, but AST SpaceMobile pushed back the launch for additional time for assembly, testing, and final preparation.

The 693-square-foot phased array will be one of the largest deployed to Low-Earth Orbit (LEO). All eyes are on AST SpaceMobile for this key launch in 2022, to validate its space-to-cell technology and business model.